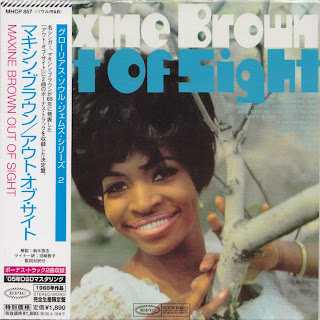 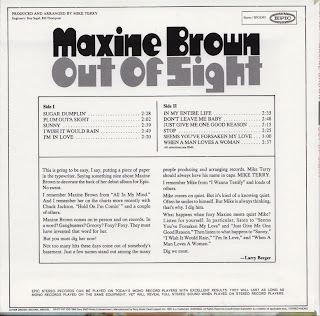 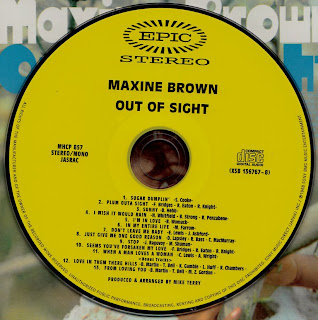 Miss Brown Is no newcomer to the hit charts, having been there with Chuck Jackson and alone on another label, but she is a newcomer to EPIC, and this LP marks her debut.
She is never sounded better. Listen to her wail "Sunny" as though it belonged to her from the beginning, and her treatment of Percy Sledge's "When A Man Loves A Woman" is a pure gem.
Hear "In My Entire Life" to Know that Maxine Brown has a hot package on her hands...[Billboard, July 1968] 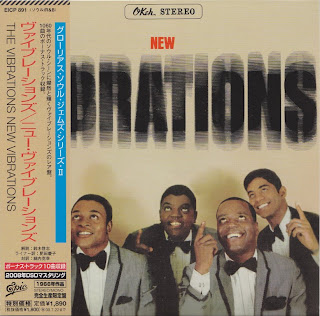 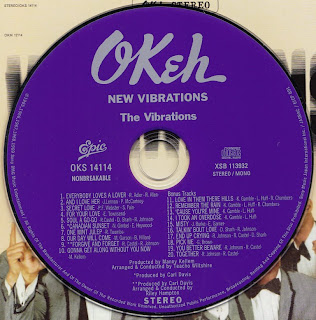 Killer "Okeh" soul by this great group from the 60s!! The record covers both sides of The Vibrations' bag – from mellow moody vocal group standards, to uptempo groovers – of the sort that have always made the group a favorite with the Northern Soul scene! The album's a nice departure from the group's earlier work, as it shows them really locking in some great harmonies on the mellower cuts – but still able to really let loose when they want to! Titles include great versions of the cuts "Secret Love" and "Everybody Loves A Lover" – plus the tracks "Soul A Go Go", "Gonna Get Along Without You Now", "Forgive & Forget", and "For Your Love". CD features a whopping 10 bonus tracks – including "Cause You're Mine", "Remember The Rain", "Love In Them There Hills", "Talkin Bout Love", "End Up Crying", "Pick Me", and "You Better Beware".
Here
Posted by Georgie Hirezola at 00:48 10 comments: 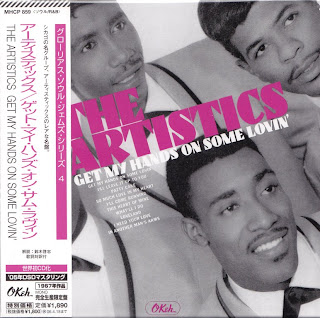 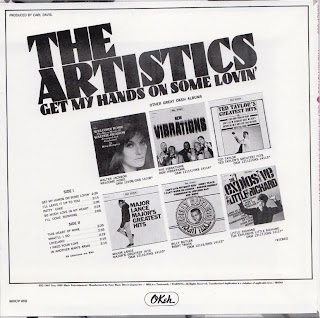 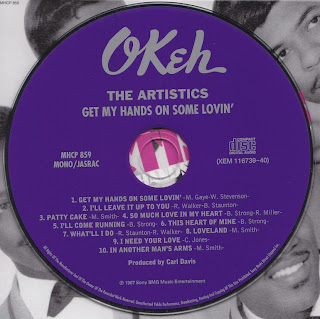 A Chicago R&B and soul group discovered by Major Lance, the Artistics were formed in 1958 at Marshall High School. They sang at the 1960 Democratic Convention and backed Lance before recording for Okeh in 1963. Original lead vocalist Robert Dobyne joined founding members Aaron Floyd, Curt Thomas, Laurence Johnson, and Jesse Bolian in 1963.
........................
Their early recordings for Okeh included the singles "Get My Hands on Some Lovin" and "This Heart of Mine" in 1964 and 1965. Former El Dorado Marvin Smith replaced Dobyne in 1964. The Artistics joined Brunswick in 1966, and scored their biggest hit with "I'm Gonna Miss You," which was also the title of their debut album for the label. They had three more moderate hits for Brunswick in the late '60s and early '70s. Smith left in 1967, though he continued singing on studio recordings. Tommy Green and Fred Pettis also served as lead vocalists until the group disbanded in 1973. ~ Ron Wynn, All Music Guide
Here
Posted by Georgie Hirezola at 01:14 3 comments: