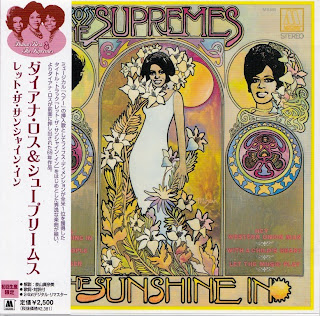 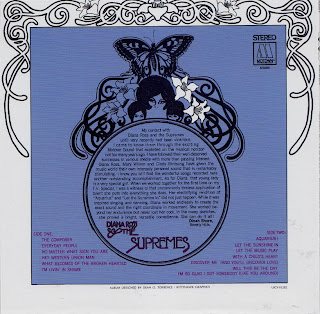 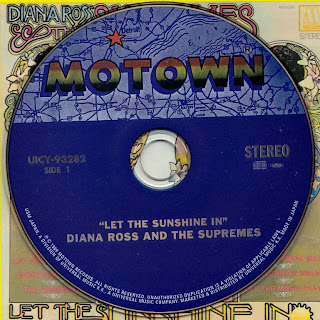 After Ballard's exit, the group was billed as Diana Ross & the Supremes, fueling speculation that Ross was being groomed for a solo career. The Supremes had a big year in 1967, even incorporating some mild psychedelic influences into "Reflections." Holland-Dozier-Holland, however, left Motown around this time, and the quality of the Supremes' records suffered accordingly (as did the Motown organization as a whole). The Supremes were still superstars, but as a unit, they were disintegrating; it's been reported that Wilson and Birdsong didn't even sing on their final hits, a couple of which ("Love Child" and "Someday We'll Be Together") were among their best.
In November 1969, Ross' imminent departure for a solo career was announced, although she played a few more dates with them, the last in Las Vegas in January 1970. Jean Terrell replaced Ross, and the group continued through 1977, with some more personnel changes (although Mary Wilson was always involved).
...................
"The three singles are so good, they alone justify buying this album: the Clan's tale of filial impiety "I'm Livin' In Shame"; Smokey's gorgeous "The Composer" and Berry Gordy's pop/funk "No Matter What Sign You Are" with groovy electric sitar. It's a lucky thing, because there's no depth here - there are a zillion covers, either servicable but pedestrian (Jimmy Ruffin's "What Becomes Of The Brokenhearted," Jerry Butler's "Hey Western Union Man" cowritten by Gamble and Huff, Bacharach/David's "Let The Music Play"), or painful attempts to be up to date (title track, Sly Stone's "Everyday People" including fuzz guitar). According to Mary Wilson, she and Birdsong were barely participating in the studio by this point; Ross meanwhile was indulging her taste for Vegas kitsch ("Discover Me (And You'll Discover Love)".(DBW)
Here
Posted by Georgie Hirezola at 21:01 5 comments: 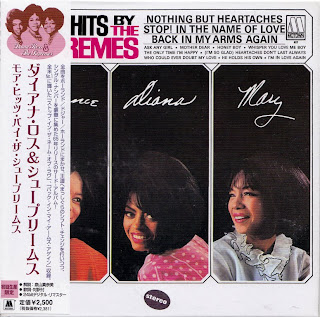 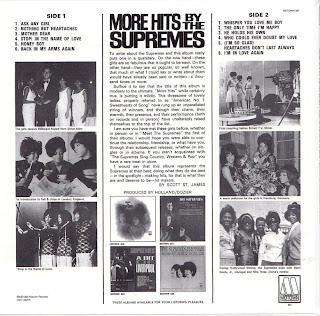 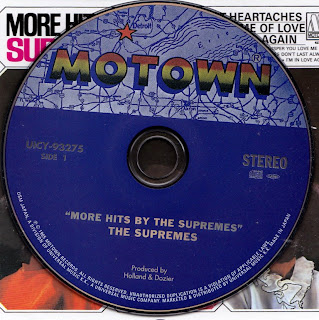 Its title might lead one to think this was a compilation, but it wasn't — rather, More Hits by the Supremes is merely a valid presumption of its worth. It was also the original group's third highest charting album of their five years on Motown, and came not a moment too soon. The Supremes were doing incredibly well as a singles act, but not since Where Did Our Love Go had any of their LPs done particularly well on the pop charts; even a well-intentioned Sam Cooke-tribute album recorded early in 1965, which ought to have done better, had only reached number 75 (though it had gotten to number five on the R&B LP charts). "Stop! In the Name of Love" and "Back in My Arms Again" helped drive the sales, but those singles had been out six and three months earlier at the time this album surfaced — listeners were delighted to find those singles surrounded by their ethereal rendition of the ballad "Whisper You Love Me Boy" with its exquisitely harmonized middle chorus; the gently soulful, sing-song-y "The Only Time I'm Happy"; and the sweetly dramatic "He Holds His Own" (with a gorgeous and very prominent piano accompaniment). The material dated across six months of work, from late 1964 through the spring of 1965 (apart from "Ask Any Girl," the B-side of "Baby Love," which was cut in the spring of 1964), and showed that Motown could put a Supremes album together piecemeal around the Holland-Dozier-Holland songwriting team and place the trio right up at the top reaches of the charts, in the company of the Beatles, the Rolling Stones, et al. Its release also opened a floodgate of killer albums by the trio — overlooking their 1965 LP of Christmas songs, they were destined to issue three more long-players that delighted audiences a dozen songs at a time over the next two years, which was a lot of good work.
Here
Posted by Georgie Hirezola at 20:04 1 comment: 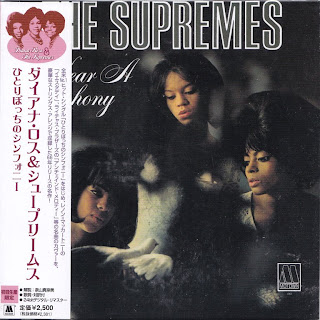 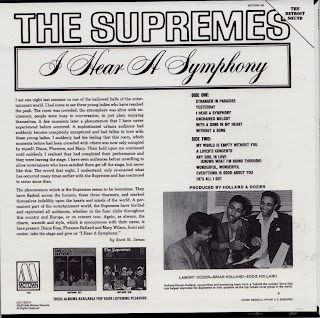 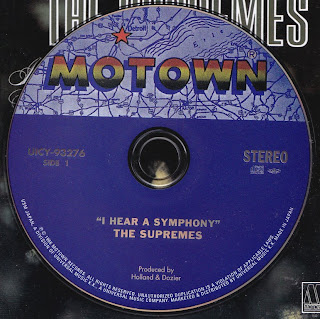 The Supremes enjoyed a successful run of hits in 1964 - 1965, and their producers Holland–Dozier–Holland did their best to keep turning the hits out. In mid-1965, the producers came to realize they had fallen into a rut when the Supremes' "Nothing But Heartaches" failed to make it to the Top Ten, missing it by just one position and breaking the string of number-one Supremes hits initiated with "Where Did Our Love Go." Motown chief Berry Gordy was displeased with the performance of "Nothing But Heartaches," and circulated a memo around the Motown offices that read as follows:
"We will release nothing less than Top Ten product on any artist; and because the Supremes' world-wide acceptance is greater than the other artists, on them we will only release number-one records."
Holland-Dozier-Holland therefore set about breaking their formula and trying something new. The result was "I Hear a Symphony," a song with a more complex musical structure than previous Supremes releases. "Symphony" was released as a single in place of another Holland-Dozier-Holland Supremes song, "Mother Dear", which had been recorded in the same style as their earlier hits.
"I Hear a Symphony", later issued on an album of the same name, became the Supremes' sixth number-one hit in the United States. After the number-five hit "My World Is Empty Without You" and the number-nine hit "Love Is Like an Itching in My Heart," the Supremes began a run of four more number-one hits: "You Can't Hurry Love," "You Keep Me Hangin' On," "Love Is Here and Now You're Gone," and "The Happening." The group performed the hit song on The Mike Douglas Show on November 3, 1965.
.......................
"I Hear a Symphony" was the number-one song on the Billboard Hot 100 singles chart for two weeks from November 14, 1965, to November 27, 1965, becoming the group's sixth number-one single. In the UK, "I Hear a Symphony" made it to number fifty, and then dropped off the chart for two weeks before re-entering at number thirty-nine...
Here
Posted by Georgie Hirezola at 00:30 10 comments: