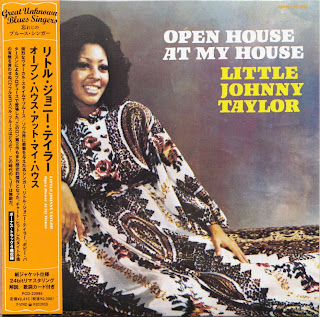 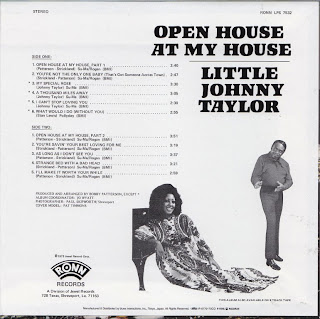 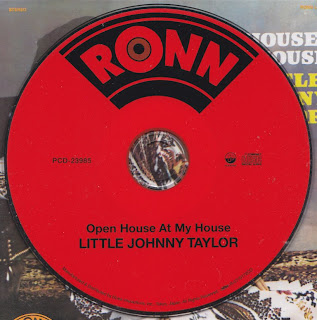 Some folks still get them mixed up, so to get it straight from the outset, Little Johnny Taylor was best known for his scorching slow blues smashes "Part Time Love" (for Bay Area-based Galaxy Records in 1963) and 1971's "Everybody Knows About My Good Thing" for Ronn Records in Shreveport, LA. This Johnny Taylor was definitely not the suave Sam Cooke protege who blitzed the charts with "Who's Making Love" for Stax in 1968; that's Johnnie Taylor, who added to the confusion by covering "Part Time Love" for Stax. Another similarity between the two Taylors: both hailed from strong gospel backgrounds.
Little Johnny came to Los Angeles in 1950 and did a stint with the Mighty Clouds of Joy before going secular. Influenced by Little Willie John, he debuted as an R&B artist with a pair of 45s for Hunter Hancock's Swingin' logo, but his career didn't soar until he inked a pact with Fantasy's Galaxy subsidiary in 1963 (where he benefited from crisp production by Cliff Goldsmith and Ray Shanklin's arrangements).
The gliding mid-tempo blues "You'll Need Another Favor," firmly in a Bobby Bland mode, was Taylor's first chart item. He followed it up with the tortured R&B chart-topper "Part Time Love," which found him testifying in gospel-fired style over Arthur Wright's biting guitar and a grinding, horn-leavened downbeat groove. The singer also did fairly well with "Since I Found a New Love" in 1964 and "Zig Zag Lightning" in 1966.
Taylor's tenure at Stan Lewis' Ronn imprint elicited the slow blues smash "Everybody Knows About My Good Thing" in 1971, and a similarly witty hit follow-up, "Open House at My House," the next year (both were covered later by Z.Z. Hill for Malaco). While at Ronn, Little Johnny cut some duets with yet another Taylor, this one named Ted (no, they weren't related either). Though he recorded only sparingly during the 1980s and 1990s, he remained an active performer until his death in 2002. ~ Bill Dahl, All Music Guide
Here
Posted by Georgie Hirezola at 18:42 6 comments: 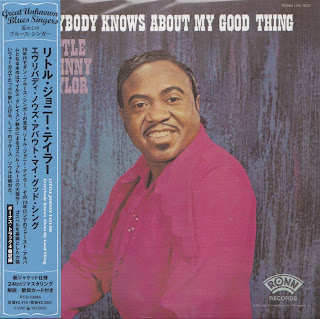 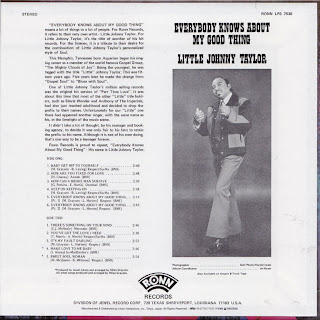 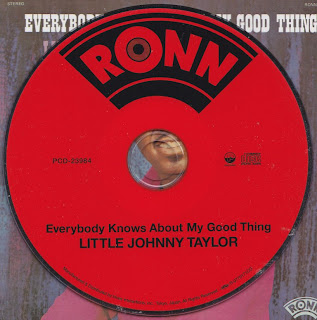 Little Johnny Taylor (born Johnny Lamont Merrett, 11 February 1943, Gregory, Arkansas – 17 May 2002) was an American blues and soul singer who made recordings throughout the 1960s and 1970s, and continued public performances through the 1980s and 1990s.
He is frequently confused with his contemporary and near namesake Johnnie Taylor, especially since the latter made a cover version of the song that Little Johnny Taylor was most famous for, "Part Time Love" (1963), and the fact that both men began their careers as gospel singers.
Little Johnny moved to Los Angeles in 1950, and sang with the Mighty Clouds of Joy before moving into secular music. Influenced by Little Willie John, he first recorded as an R&B artist for the Swingin' label.
However, he did not achieve major success until signing for San Francisco-based Fantasy Records' subsidiary label, Galaxy. His first hit was the mid-tempo blues "You'll Need Another Favor," sung in the style of Bobby Bland, with arrangement by Ray Shanklin and produced by Cliff Goldsmith. The follow-up, "Part Time Love", became his biggest hit, reaching # 1 in the R&B chart, and # 19 on the pop chart, in October 1963. The record's success owed much to Taylor's gospel-style singing, Arthur Wright's guitar and a horn-leavened downbeat groove. However, follow-ups on the Galaxy label were much less successful.
By 1971, Taylor had moved to the Ronn label subsidiary of Jewel Records in Shreveport, Louisiana, where he had his second R&B top ten hit with "Everybody Knows About My Good Thing" . The following year, he had another hit with "Open House at My House". While at Ronn, Little Johnny also recorded some duets with Ted Taylor (also unrelated).
Here
Posted by Georgie Hirezola at 18:38 7 comments: