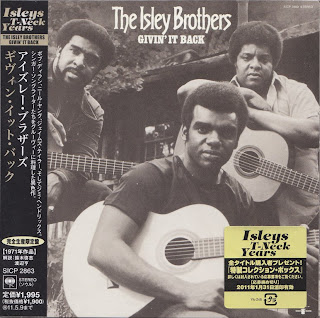 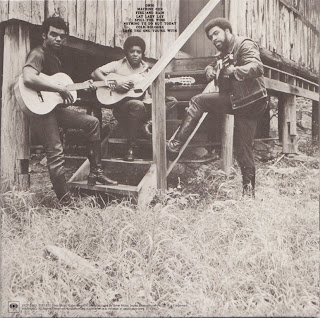 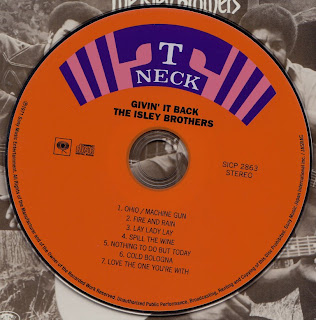 Givin' It Back is as much a time capsule as an album. Not that it can't be enjoyed on its own absolute musical terms by someone just off a boat who wasn't even around in 1971, but to really appreciate how daring it was and how delightful it is, that side of its history should be known. Those who are old enough should recall the time whence it came, an era in which hatred and disunity over the Vietnam War, civil rights, school desegregation, the environment, and a multitude of other issues were threatening what seemed, potentially, like the beginning of a new civil war, this one not between states but between factions and ethnic and racial groups in 1,000 individual neighborhoods. The opening cut of Givin' It Back, "Ohio/Machine Gun," is a slap-in-your-face reminder of just how angry the times and the people were. The track evokes instant memories of the campus bloodshed of 1970, not just at Kent State but also the often-forgotten killings a few days later at Jackson State University in Mississippi, where the victims of a fusillade of sheriff's deputies' bullets were black students. More than that, the track itself is also a reminder of the divisions that existed on the left; to listen to pundits on the right, the anti-war and civil rights movements, along with the counterculture, were all part of one vast, organized, calculated left-wing conspiracy. The truth is that there was nearly as big a split, culturally and politically, between young blacks and young whites on the left and on college campuses as there was anywhere else in the population. Blacks reacting to years of oppression had little use for mostly middle-class white college students, however sympathetic many of them purported to be to their situation, while well-meaning white students and activists couldn't begin to know what privation of the kind experienced by blacks and Hispanics in most American towns and cities was. In music, too, there was a lot of division; blacks usually didn't resonate to the top artists in the white world and, in particular, were oblivious to (and even resentful of) the adoration accorded Jimi Hendrix by the white community. So, when the Isley Brothers -- whose appeal among black audiences was unimpeachable -- opened Givin' It Back with a conflation of Neil Young's "Ohio" and Jimi Hendrix's "Machine Gun," they were speaking to anger and bloodshed in the streets, but they were also performing an act of outreach that was about as radical as any they could have committed on record in 1971. That they incorporated a prayer into their reformulation of the two songs, amid Ernie Isley's and Chester Woodard's guitar pyrotechnics, turned it into one of the most powerful and personal musical statements of its era, and it's worth the price of the album just for the one cut. Givin' It Back is filled with virtues of that kind, however; it was the first Isley Brothers album to rely entirely on outside material, but the group's reworkings of songs by James Taylor ("Fire and Rain") and Stephen Stills ("Love the One You're With") show no lack of originality. They're unafraid to take the song apart and rebuild it from the ground up, smoothing Bob Dylan's "Lay Lady Lay" into a sensual soul ballad, turning the James Taylor number into a sweaty, earnest shouter, and transforming War's "Spill the Wine" into an extended workout for voices, electric guitars (several layers deep), flute, and percussion. The album was also an early showcase for Bill Withers, whose funky blues "Cold Bologna" is covered by the group with the composer -- who was about to emerge as a major star in his own right -- on guitar. And the closer, "Love the One You're With," is sent soaring to heights that the Stephen Stills original could only gaze up at. Givin' It Back is often held at arm's length by soul listeners, who don't regard it as central to what the Isley Brothers or their music are about; on the contrary, the group is so successful at remaking all of the songs here their own in style and approach and sending careful messages (alas, largely lost with the passage of time) in their selection as well as their content, that it really represents a lot of what the Isley Brothers and soul music were about in 1971, and it's still great listening. Reissued by Sony with new notes, and worth every cent of its list price.[allmusic]
Here
Posted by Georgie Hirezola at 00:59 5 comments: 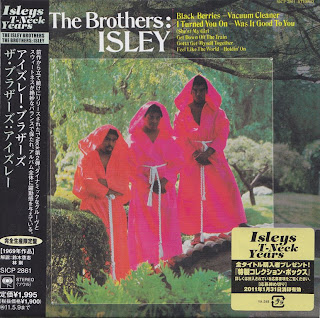 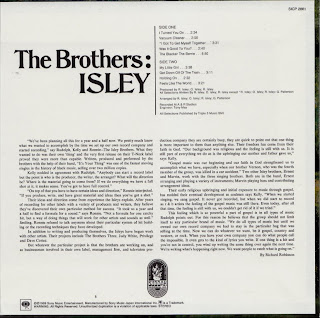 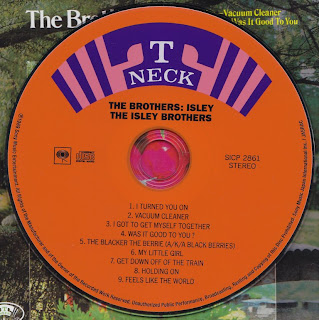 The late '60s and early '70s remain a favorite period in the Isley Brothers evolution. Ronald sung hard, and brothers O'Kelly and Rudolph supplied church-inspired backing whoops to his lead. The tunes had catchy titles and creative, rhyming lyrics. This recording is loaded with that rocking, "It's Your Thing" style. "The Blacker the Berry the Sweeter Juice" isn't about fruit but speaks of the desirability of dark-complexioned women. "I Turned You On" has a grinding, churning rhythm; "sock it to me" was a catch phrase at the time and the Isleys included the popular phrase prominently in the song. "Feels Like the World" is a slow morbid statement about one's condition, while "Was It Good to You" is fast, fluid, and asks the universal lover's question. A good period for the trio, Ron sung close to his natural register, which will please those who dislike the softer falsetto voice he fell in love with later.[allmusic]
Here
Posted by Georgie Hirezola at 00:55 No comments: