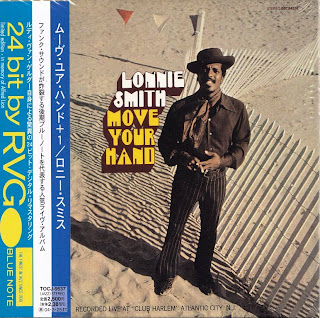 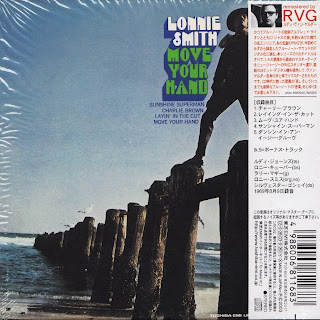 "REPOST"
Anyone that has listened to Lonnie Smith should know that Dr. Smith is at his best when performing the slow and grinding ilk of funk. While his album "Live at Club Mozambique" is a great and funky disc, it tends towards the faster and more energized groves; it only gives us a taste of the grinding slow stuff. This album, however, gives us a lot more of the slow grinders that Dr. Smith is rightly known for.
......................
Just as Lou Donaldson's albums broke loose of many blues cliches a few years before, introducing a new funky boogaloo rhythm into Jazz, Lonnie breaks free of the boogaloo funk cliche's of the '60s and absorbs the funk of JB and then contemporary black radio. In fact, this is probably the least dated B3 CD of that era. He even does a bit of singing visa vis the enormously funky "Move Your Hand" which could of just as easily been taken up by George Clinton and P-Funk.
Cool, Funky and Groovin', this album along with Jimmy Smith's ROOT DOWN and Lou Donaldson's Midnight Creeper are definitely top picks for the true Hammond B-3 funkateer.
......................
Lonnie has that essential groove that remains through the whole album. Right from the first track you realise you are on one of Blue notes very special albums. "Charlie Brown" sets the scene while "Layin in the Cut" builds up the pace to an awe inspiring state on one of the greatest groove organ tracks I have ever heard. On the Title track "Move Your Hand" Lonnie matches his organ brilliance with unique heart felt vocals. On "Sunshine Superman" Lonnie continues the saga. The man is backed by awesome performances on guitar by Larry Mcgee and Rudy Jones on Tenor Saxaphone as well as many other musicians also giving excellent performances. This is an album that always remains by the stereo, mainly in it. You will always return to it. This is the exact music you would want to listen to in your favourite bar with dim lights a groovy armosphere and your favourite drink in your hand...[net]

Here
Posted by Georgie Hirezola at 03:40

Thanks for posting, Georgie. This one sho 'nuff is funky.

Incredible. I haven't seen this one in ages. Thank you for all you do!

Thank you Mr Magic for LONNIE SMITH - MOVE YOUR HAND

You definitely the man.

Many thanks for sharing this high quality rip and scans of this really great groove record!

Much appreciated, had Move Your Hand (the track) on my brain for weeks after digitising an old Bluenote Comp. Never heard the whole LP - great blog - thanks.

wow excellent thanks for the re post haha I have hear that this guy hide some cds in somewhere and now they are going to be topped to best.